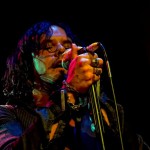 BENNY DOYLE for Time Off
Under a veil of darkness and blood red sheen, Jeff Martin 777 take to the stage and rip directly into a howling take on The Ground Cries Out. The three-piece make an offensively large sound, combining the uncompromising rhythmic metronome of Malcolm Clarke and Jay Cortez while Martin is playing his role to perfection, looking every inch the rockstar and doing things with his guitar and voice that are humbling to say the least. Defying their short performance life, the band are clinical in their execution and with a myriad of guitars to provide the full palette of sound, they revel in new material such as 1916, Riverland Rambler and the roots freak-out of Queen Of Spades. It’s The Cobra though that really leaps out as the pinnacle of what this 777 incarnation are trying to achieve, blending Martin’s Middle Eastern-infused past with an earthy new beginning, the string-snapping bow intro especially enamouring. The biggest responses of the evening, however, is still saved for Tea Party material, the band turning the night on its head by creatively marrying Requiem with Nine Inch Nails’ Hurt and thrilling the faithful with a late trifecta of Rakim, The Halcyon Days and Sister Awake. Finishing with a climatic Tea Party encore of The Grand Bazaar and Coming Home, Martin is bringing his past into an exciting new future and providing yet another chapter to a storied career.

A series of recent live photos can be found here.